Erinn Peet Lukes and The Matchsellers 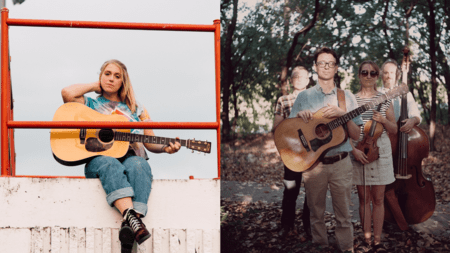 Erinn Peet Lukes
With her pure, angelic voice and bluegrass-inspired sensibilities, Erinn Peet Lukes makes music that crosses genres with melodies that are fun and memorable. Growing up in Southern California, the singer/songwriter left home at 18 to explore the music scenes in Seattle, New York City and Denver, writing and performing along the way. After years touring with her popular bluegrass band Thunder and Rain, she moved to Nashville and recorded a pop, country, and rock influenced EP with a top notch team. In her decade long career, Erinn has shared the stage with great songwriters such as Jennifer Knapp and John Paul White of the Civil Wars. Her songwriting has gotten her placed in the Kerrville New Folk Competition (2018) and the Merlefest Chris Austin Songwriting Competition (2021). In the summer of 2021 she graced the stage of the world famous Station Inn in Nashville, TN for the very first time....but definitely not the last!


The Matchsellers
Over the course of the last decade, the Matchsellers have proven themselves to be one of the most creative and note-worthy Bluegrass groups to emerge from the Midwest. On their ambitious new record The Wishful Thinker’s Hall of Fame (due out Oct 28, 2022), the group masterfully shows that “art for art’s sake” has a place in the folk multiverse.

The core musical partnership of Andrew Morris (Guitar/Vocals) and Julie Bates (Fiddle/Vocals) began when the two met in Leipzig, Germany. They were two American Midwesterners on Fulbright Scholarships working as Cultural Ambassadors to Germany. Now, nearly 10 years later, they are true folk trailblazers creating entire universes with their music.

Morris and Bates are joined on Mandolin by Brian McCarty (Greg Blake Band, the Bluegrass Missourians) and on Bass by Brandon Day (Kansas City Jazz Bassist). With the addition of McCarty and Day, the Matchsellers’ newest iteration is as free, joyful and powerful as ever. The band is at the apex of its songwriting and musicianship.

Willi Carlisle is a fan of The Matchsellers’ newest line-up. He proclaims, “Morris’ plaintive bawl and humor accentuates some of the best flatpicking in the biz (and it gets experimental here, too) while Bates gets a lot of good work done on the fiddle and folksy, mellow vocals… With vaudeville and virtuosity, this new offering pipes along with genre-hopping energy.”

The Matchsellers are a rare breed that is truly in it for the sake of the art. In a recent interview frontman Andrew Morris explained, “Sometimes, I feel like music is a kind of disease. It infects you and you can’t get rid of it. I really wish that something else had taken over me. Something where I could make a bit more money. Something that wasn’t so difficult. But I don’t really have a choice. You got to eat what the lunch lady gives you.”